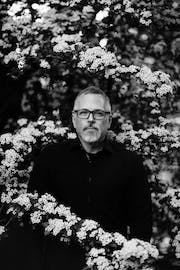 An uplifted fox escapes his human captors and embarks on rebellion.

How tiresome it became, too, for other reasons. Oh, how these dead people who lived in houses on lots where they had cut down most of the trees loved trees. How they loved to be out in the trees. The tales they told about the trees and how they loved them. Perhaps because trees did not resist. Trees fell over of their own accord, sometimes, as if to prove their love of the ax. The chain saw that felled most of them just completed a tree’s own inevitable thought.

The proof—that trees never turned chain saws against the ones that wielded them. The chainsaws, which were even named, as if they were as alive as a tree, had a personality. Greta. Berta. Charlie. Frank. Sarah. So some we killed with chainsaws, to remind them of what it really meant to be a tree. A messy business. Difficult for them and for us.

Absurd of foxes to do all of this. We had no hands. We did not walk upright. We were not made to use human tools. Yet still we did it, and did it well and with vigor.

Do you doubt me? Do you not see the corpses strewn there in my mind’s eye? Can you not distinguish truth from fiction? Or were you never taught the difference?

I'm not laughing at you; I'm laughing with you. Except: foxes don't laugh, they grin. Do you know what a grin means from a fox?

But I was not content to wage such a ragged war upon the enemy. I raised a great liberation army and stood one dusk looking out upon the glittering plain where the humans had camped. They did not know we were their enemy. They had come to that desolate place to battle another army of humans. That was the way of them—to fight each other even as they waged war on us as well. War against us was a casual affair, as quick as thought but without thought.

I stood above that glittering valley, the dusty plain, and watched the legions arrayed there. An army that didn’t think of itself as an army. Even as they killed us quick and casual, slow and calculated. Poisoned the darkness with an everlasting and cruel light. They did not smell our blood, heard nothing that we shrieked out or moaned.

We set upon you in the night. And you bewildered that your quarry should be full of so much rage, as if killing us had been a gift you’d given us. Confused that we fought to the death. That we could overcome the animal instinct to flee, to survive, to subsist.

We stormed the gates. We died in droves. We laid siege. We were destroyed from within and from without. Still, we surged. Still, there were enough of us…for a time.

So much I could sense, that they could not, even in the middle of battle. The electromagnetic fields were already in my head. The trails left by voles crisscrossed the night ground, luminous green. I could never be lost, held tight that way by the world. There was no darkness for me, no light.

Yet still I lost, because I was being human.

Killing is easy. I think that’s why people do it so much.

But soon I realized the error. I was just doing what had been done to me and mine. Revenge was not sweet. Revenge deformed. I saw my mistake and I atoned because I had been bad, revolutionary turned terrorist. Soon, I was on the march with my army again—this time rebuilding what we had destroyed, helping humans repair their cities, restore their lights, their shops, their vehicles. And they were thankful. They thanked us as they always had, for we had misunderstood, thought that they did not love us. But of course they loved us, because they said they did.

No, that’s not it. That’s not what happened. Who could in their hearts forgive mass murderers? It’s that it still wasn’t enough. There were too many of you and too few of us. I could kill you until from sunrise to sunset and it would never be enough.

Still, I tried. I attended social events. I observed and thought about what I saw. At a masquerade, a cocktail party. On another Earth, where still you humans congregated at public institutions and people’s houses to drink and talk because there were institutions because there still were houses. If I could kill humans, I could disguise myself as one to mingle. Mingling was a big thing for humans. To show off houses. To show off wealth. Like marking things was for us.

This house had a slow death of useless objects on its walls. This house stank of toxic house cleaners and the food stank of pesticides and the people stank of pesticides, too, but didn’t know it. I didn’t have to kill any of them; most were dying of cancer, slowly, and didn’t know it. Most had bellies full of plastic. The plastic would grow and grow in their bellies until, years from now, as they mingled, as they drank expensive wine, their bellies would burst and out would come all the plastic, dribbling down onto the floor. Pressing cool and bloody against some synthetic floor. Plastic in love with synthetic. Pressing there cool and bloody. Finally home.

Businessmen mingled at this party. They mingled with artists who made them amazing sculptures of abstract animals and cute animals. The owner of the house loved the ironic taxidermy of roadkill. “If it’s roadkill, it’s pure. I just make them beautiful again.” The taxidermist was there.

I wondered if I ran over the taxidermist and preserved her in resin if she would feel beautiful. If she would feel pure. Exploded first into a jagged eruption and pulling apart of flesh and tissue and bone and sinew. Left with a hole where the chest had been. A face half sawed off. Or perhaps a broken back, still alive and gasping, but crushed to asphalt in the middle, hoping now for another car to finish the carnage.

“What about sports?” But you could not talk about sports because the weather had “fucked up” the sports.

What could we talk about? I complimented the owners on their house. My voice had a rasp to it, then. I wasn’t yet comfortable talking human. My voice had a rasp, and I gazed upon the bison head on the wall and my voice became raspier still. I gazed upon the mossy rock imported from another country, the water feature in the house, and wanted only to return to all fours and to drink from the pond. To gaze at my reflection and remember who I was, not what I had become.

“Did you find that here or did you have to go online?”

“That tablecloth created by forced labor looks amazing on that table manufactured with formaldehyde in a sweatshop.”

“Do you have the new phone yet that someone made continents away because they were forced too and then someone else starved to death because when they mined the components they destroyed all the crop lands and the forest?”

It was bracing to hear such honest talk, even if only in my head.

“And what do you do?” Directed at me.

The rasp: “I’m in private equality.”

“Wolves all in equity.”

Then I revealed myself and my emissaries came smashing through the special non-reflective glass that had stopped birds from flying into it even as the owners’ vehicles and leaf-blowers and pesticides had poisoned all the birds into extinction.

There is a question I should ask, but I feel you’ve forgotten the answer. I feel there’s no point in asking now.

A fox is just a prisoner who hasn’t escaped yet.

A fox seen in the daytime must have something wrong with it.

A fox is a question that must be answered.

A fox is vermin. Ought to be shot. Quite right. Loose the hounds, my good man. Train them first on the kits, or the hounds will never learn to kill a full-grown fox. Tally. Tally ho.