“‘Heredity‘ is not a word that anyone needs defined. We all know what heredity is, or at least we think we know.“

“What are you writing about these days?”

It’s a question we science writers get a lot, and it can be one that we dread. If we reply, “tyrosine kinases,” or “Bose­Einstein condensates,” we get a blank stare. The great challenge of writing about science is to make the unfamiliar familiar.

I did not have to suffer those blank stares as I was working on my new book, She Has Her Mother’s Laugh: The Powers, Perversions, and Po­tential of Heredity. “Heredity” is not a word that anyone needs defined. We all know what heredity is, or at least we think we know.

When people found out I was working on a book on the subject, they instantly leaped into stories about their own heredity — about the tra­its they share with distant ancestors, about the results they’ve just gotten from a genetic testing service like 23andMe. They announce to the per­centage of Neanderthal DNA they had inherited, down to the decimal.

Those responses confirmed the hunch that had inspired me to write She Has Her Mother’s Laugh in the first place: heredity is a profoundly important force in our lives. We use it to define ourselves, to link ourselves to history, to find a place for ourselves in human culture. The reason that stories about genetically edited babies grab the headlines is that heredity is so important to us. We worry about tampering with its future.

The importance we put on heredity is nothing new. All cultures on Earth have explanations for how the living are linked to the dead. The word traces back to Latin. Hereditas was the word that Romans used to describe how rights and proper­ty were inherited when people died. In medieval Europe, kings inherited thrones and kingdoms. And they paid to have elaborate family trees con­ structed that justified their inheritance.

Gradually, heredity shifted from outward we­alth to inward qualities. Noblemen were noble because they inherited noble blood – just as nob­le breeds of horses and falcons inherited their own version of nobility. If a few people inherited noble blood, then other people had to inherit their lower station. By the 1500s, Spain’s nobility also began to define themselves by their pure “Old Christian” blood, which had to be free of Jewish or Moorish blood. They began to define these different kinds of people as races. Soon the word was applied to other kinds of people – especially the Africans who were being enslaved to enrich Spain and other European countries at the time.

Heredity may be old, but science did not ad­dress heredity in any serious way until the nine­teenth century. Early psychiatrists began to tra­ce mental illnesses through families. Naturalists like Gregor Mendel ran experiments in the hopes of breeding better crops and animals. Charles Darwin recognized that his theory of evolution depended on heredity. He struggled to explain the quirks of heredity – how traits could merge in offspring, disappear, or reappear. But he failed.

Genetics has advanced so far that today you can read your own DNA for a modest fee. That in­ timacy gives us an unwarranted sense that we un­derstand how heredity has shaped us.

The science of genetics, born in 1900, offered the world an entirely new way to think about he­redity. But it took decades for geneticists to figure out how DNA encoded genes, and how they were passed down to future generations. In the meanti­me, genetics was abused in many countries to ju­stify injustice: the sterilization of people accused of being “feeble­minded,” laws against interracial marriages, immigration bans, and genocide.

Genetics has advanced so far that today you can read your own DNA for a modest fee. That in­ timacy gives us an unwarranted sense that we un­derstand how heredity has shaped us. Science is now revealing an extraordinary complexity in the way the genes we inherit influence the traits we develop. We’re also learning that many of us did not arise from a single fertilized egg containing a single set of genes we inherited from our pa­rents. Many of us our chimeras. Some of us are combinations of cells from twins. Many mothers have cells throughout their bodies inherited from their children.

We should also look beyond genes for other forms of heredity. Researchers are finding that mi­crobiomes and epigenetics are important in many species when it comes to understanding how tra­its are passed down through the generations. Just how important those other channels of heredity are to us humans is a fascinatingly open questi­on. One thing is clear, though: we humans have a form of heredity that barely exists beyond our species. We have cultural heredity. We can learn and teach, passing down knowledge and beliefs for centuries.

If we simply pass down harmful, obsolete ideas about heredity, we will do ourselves a dis­service. But if we can build on what we have in­herited, future generations will be able to make better sense of this defining mystery. 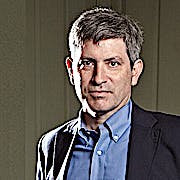 CRISPR in the Gene Pool